It’s mid December 2019…and somehow i have crow barred my way on to a televisual history of welsh comedy. It’s presented by golden boy Elis James (who i used to know when he was a humble barista in Cardiff all those years ago), on BBC One Wales. It’s comprehensive as these things go. The usual, and a couple of the unusual have featured so far..i’ll try adding some photos when i can (probably crap ones of a TV screen)…

Owen Money was interviewed, which is kind of fair enough, but i winced when he said he nicked his material off others – he was so nonchalant about it!!

The Gavin and Stacey lot were there – and let’s face it Ruth Jones is fast becoming an institution: she’s turning into a school for the deaf just outside Pontypridd.

Of course Ryan and Ronnie had a big bit…maybe only viewers in Wales would remember them despite them having made several shows in english, and broadcast all over the UK. They were, no bullshit, as funny as M&W, with Ryan a powerhouse of energy.

Me, i was not interviewed by the big E himself, but by the director (who is ironically called England), and, as i expected, a mere fraction of what i spoke about actually got in. But hell i got in, and on TV for Xmas! On english language TV only – for  S4C has ignored me…again! (I’m not bitter honest).

Peter Baynham had a short spot. To me he is a remarkable character – not just character ‘act’, though that as well – i gigged with him in the late eighties, such an unassuming guy, but unexpectedly brilliant – especially on the writing side of things. Elis asked him if there were any other welsh comedians around when he was in London, and Peter amazingly said  ‘Noel James…he’s a genius’…

sorry i’m not bragging…but i am just so chuffed that he said that..and when Peter went onto to describe how i painted myself blue for a late night Comedy Store gig in 1988 I knew immediately that he must have been present at what was only my second ever gig – as i only ever painted myself blue 5 times while i was in London I recall everyone of them fairly clearly – and a memorable gig it was.

Peter said i had commitment to have painted myself blue, all for the sake of a joke that went : ‘I’m a blue comedian’. Yeah well, nice idea, and yes, as he said, i did do the blue make up, but I never said that punchline. No way.

It’s strange. Just a few years ago Kevin Day – who is an amazing joke writer – said on a podcast that i painted myself blue as a joke on being a smurf. Not true. I would never have done such a joke. Why is the truth so hard to recall? I guess the visual aspect of the early act served its purpose though i.e. people still remember the blue comedian.

So what was the joke? what was the punchline? It’s like i have to remind myself that I, above all others, must know the truth as I am the one who, you know, did it; it was MY act. But, on the other hand, isn’t that how history is written…by observers? Here’s the truth:  There was no punchline. The only reference to my make up  – or the COLOUR of it  – were these opening lines:

“I’m not colour prejudiced but I fuckin’ hate blue people…that’s what they used to say to me when i was a boy, all for the colour of my skin…too long in the womb they said, and four years is pushing it…”

I think maybe there was some slight reference to being blue blooded as well, but really the rest of the 10 minute set had not one reference to blue. Not one more verbal reference, that is, though at the climax i would remove my top (which was a tatty old blue Tibetan jacket/kaftan) to reveal, on my chest, the word ‘blue’ written in blue.

While i appreciated being invited on to Funny Nation i was slightly annoyed by the fact that they didn’t include my own explanation of why i did the blue thing. For i did explain it in full to the director. Instead we hear Peter Baynham saying it was a joke on blue comedian…..NO NO NO (I sound like Thatcher now) !  But anyway what’s a little inaccuracy if at the same time one gets complimented by an artist like that?

There was a reason why the smurf myth happened as well….and that was really frustrating. It involves a horrible crowd at the infamous Tunnel Club, and it’s equally infamous MC Malcolm ‘Oy Oy’ Hardee……but that’s another story. 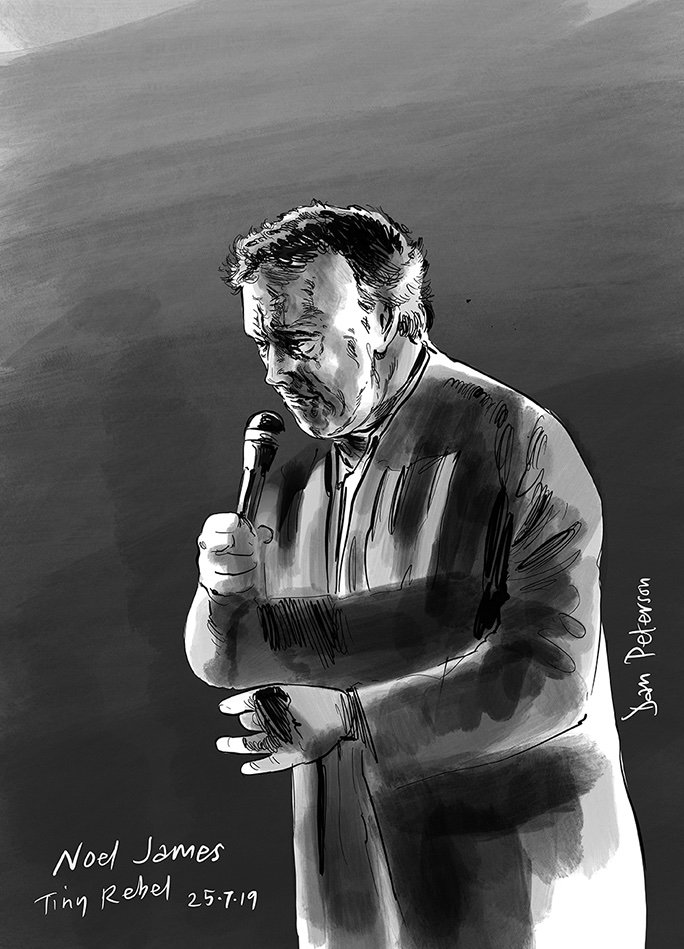 what a lovely word, it’s a village near Carmarthen. Today – wed 19th of June 2019 – i was there, delivering a talk to some catering students…not that i know much about that subject (apart from my love of food). I tried telling them my story so far. They were a tough crowd, being chilled to the point where they needed blankets!

It’s not a great joke, in my estimation, but I get it. Perhaps, had she said ‘Cow shit’ instead of battery acid there wouldn’t have been any flack.

I doubt if anybody would actually commit this act just from listening to Brand telling a joke on Radio 4…..a typical Radio 4 listener is more likely to come round your house and unlawfully dig up the weeds!

What’s weird is: the joke does not infringe any of our agreed political correct ‘rules’ i.e. it is not sexist or racist.  Yet she has apologised, while the BBC has removed it from the show. Is this what the rise of the right will lead to? Censorship?

This gentleman sadly lost his battle with cancer earlier this year – Feb 2019.

I’m not going to pretend I knew him well. The strange thing is, having been on the comedy circuit since the late 80’s, I only got to meet and talk with him a couple of times, the most memorable meeting taking place in 2017…

…..We were both playing a comedy festival in Cardigan, actually in a marquee on the grounds of Cardigan castle. We had separate marquees, mine could hold about 40 people his about 400.

For that show I eventually got about 7 punters while JH sold out – his Radio 4 fan base coming in handy no doubt.

As a Welsh man gigging in my own country I was of course miffed by these attendance figures. But luckily i’d arranged for the venue to agree to a guaranteed fee for me, not a lot but at least it was something.

Anyway, Jeremy and I bumped into each other in the courtyard. He recalled me from an earlier meeting in the Balham Banana Cabaret. He was so friendly, and wanted to meet for a beer after his show. I was surprised and  flattered. He always struck me as a nice guy. I then watched his show and of course he had the crowd in the palm of his hand. He threw in a mensch for my show whilst onstage – not that it had much effect, but a cool thing to do nonetheless.

Jeremy was what is loosely termed a political comedian. Categorising comedians can be a bore, but one has to say that JH did submerge himself – material wise – in the illustration of what he perceived as right wing injustices. He apparently was once even shot at whilst visiting the West Bank by Israeli soldiers….some gig that must have been!

Unlike some comics who go on politics and human rights his material was free of hypocrisy i.e. he did not preach political correctness while at the same time picking on some other unsuspecting social group. Also, his material was genuinely witty, being clever in its structure and punchlines.

To be honest the only thing i now recall in detail of his material that night I recall because it angered me slightly.  I seem to remember him mentioning Plaid Cymru, saying “I wouldn’t vote for a party that has the words ‘national’ and ‘socialist’ in the title.”   The joke was essentially comparing Plaid Cymru to the Nazis. That to me was the only joke that lacked balance, because it’s a bit harsh to make that comparison in my opinion. Wales is after all only a small nation with a threatened culture!

As a person who raised in a welsh speaking home i am constantly reminded on my travels around Wales of the influx of people, and the disrespect often shown to the native language.  As i sat there in the audience for JH’s show I could tell – maybe he couldn’t – that a large proportion of them were incomers to Wales. The fact that JH referred to the crowd as ‘Welsh’ people made me laugh for the wrong reasons. Yes maybe they live and have bought homes in this beautiful part of the world, but are they even aware that the mountains, hills and fields around here have their own ancient names?  This irked me more because of the gig’s location. Cardigan is in west Wales which is still seen as a stronghold for the welsh language….an image which in reality is fast becoming bullshit. Walk down Cardigan high street and the accent you hear is just as likely to be Midlands, Yorkshire, or anything except the perceived stereotype.

Anyway we discussed it. And he bought me a pint. And it was all good.